An Inspector Calls by J B Priestly is an interesting play which thrills the reader in several different ways. Written in 1912, this play is a mixture of social criticism, religious idealism and family drama.
The play opens in Mr. Birling’s dining room where the family is hosting a dinner. Present in the room are Mr. Birling, Mrs. Sybil Birling, Miss. Sheila Birling (their daughter), Mr. Eric Birling (their son) and Mr. Gerald Kroft, who might marry Sheila. Mr. Kroft is to inherit his father’s industry which has been offering tough competition to Mr. Birling’s.
As soon as Gerald gives a ring to Sheila as a sign of engagement, an inspector called Mr. Goole calls and the plot begins to thicken.
Eva Smith, a young working class lady, has committed suicide. Mr. Birling admits that he had to dismiss the lady, even though she was a good worker, when she asked for a pay rise. He dismisses her from a photograph shown by 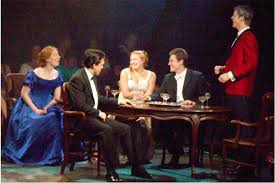 Mr. Goole. He confesses that it was an unfair thing but he believes that he was left with no option.
Sheila who walks in also gets to see the photo and recognizes her as the girl she forced a ready-made shop to fire from service. This was the girl’s second job. When she brought a dress to Sheila she first held it close to her body and it looked great on her. When Sheila tried it, it looked ridiculous on her. She An Inspector Callsnoticed the girl smiling at another sales girl. Infuriated with jealousy, Sheila forced the shop to dismiss her, using her father’s position as a major industrialist and a politician.
Now Gerald is also shown the photograph and he confessed that he also met her at a bar and gave her some money and a place to stay in. In other words, he kept her as his mistress. She had changed her name. During that time, he did not come to meet Sheila and his excuse was that he was too busy with his work. Sheila immediately returns his ring though she acknowledges his honesty.

Now it is Mrs. Sybil Briling’s turn. As the head of the charity committee she also wounded Eva when she approached her as Mrs. Briling. She was put off by the fact that the fake name Eva used was her own. She asked the committee not to help her though the girl was pregnant. She also refused to believe the girl’s story that the man who impregnated her had offered her some compensation but since it was stolen cash, she did not take it so as not to make the man a thief. Mrs. Briling asks whether a girl of her standing could afford to be so conscientious. Sheila tells her not to play into the inspector’s hand by being so innocent as he might tear her to pieces. However, against Sheila’s protest, Mrs. Briling says that the young man should be properly punished.
The last one to fall in is Mr. Eric Briling. He admits that he was the one who impregnated the girl and stole the money from his father’s office to pay the girl. In a way the girl didn’t lie about her name this time. She considered herself as the wife of Mr. Eric Briling. So she introduced herself as Mrs. Briling.

Eric and Sheila confess their guilt but their parents and Gerald sticks to the idea that it was the girl who should be blamed. The inspector walks out telling them that such uncivil practices will be met with fire, blood and anguish.
After the inspector leaves, Gerald manages to find out that there is no inspector by that name in the entire police force. They also find that no girl had committed suicide that night. This makes the inspector and impostor and all except Sheila and Eric consider themselves exonerated. They vehemently argue their way out of it, though they admit that he was of a strange nature and behaviour. He knew everything even before they opened their mouths.
The play ends when they get a phone call informing them that a girl has committed suicide and that a police inspector is on his way to meet all of them.
The real identity of the inspector is left to the reader’s speculation. So is the question whether he was showing them the photographs of different girls. We also hear the parents and Mr. Gerald passing a poor opinion about some of the great writers of the time.
If we take the play as a symbolic representation, it can be observed that Eva represents the woman folk from the working classes about whom the rich people has no regard. They exploit them in different ways. They are either workers, or sleeping partners for them.
The inspector’s words ‘fire, blood and anguish’ refers to suffering in hell or at the hands of the revolutionaries or a stern legal system in future. We see that Sheila and Eric are willing to learn a lesson but the others refuse to do so. Everyone’s real nature is brought out by the inspector.

Whether they all wronged the same girl or different one is not an important question. It is only as insignificant as the parents’ and Gerald’s question whether the inspector was real or fake. See holistically, this is what working class women suffer at the hands of the rich everywhere in the world, then and now. This is how the rich see their own mistakes, then and now. This is the lesson that many refuse to learn, then and now. In other words, this is a theme that goes beyond time and place. The writer is able to present it in such a way that it has several layers of meaning and all of them are more blatant and not subtler than the other.

SO FAR, SO MANY