God Lives in the Panch and the Writer, in his Work 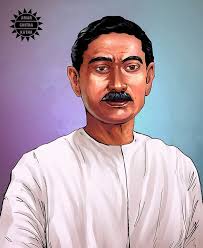 Munshi Premchand’s story God Lives in the Panch glorifies honesty as an eternal value which comes from God and, at the same time, reveals the contemporary life beyond what is intended. The characterization and plot are carefully thought out.

Alagu and Juman have been friends from boyhood. Juman didn’t take care of his aunt even though he had appropriated her property and when the case was brought before the village panchayat, Alagu, the chosen judge opted for a fair judgment which went against Juman. According to Alagu’s verdict Juman was to pay a fixed amount to his aunt every month, otherwise her property should be restored to her. After this Juman and Alagu were not on speaking terms.

Later Alagu sold a bullock to Sahu who killed it by making it overwork. Sahu had not paid for the bullock and now that it was dead he said he won’t pay at all. When the case was brought to the Panchayat, Sahu chose Juman banking on the latter’s desire to take revenge on Alagu. But Alagu, just like what Juman had done earlier,  opted for a fair judgment which went against Sahu. According to Alagu’s verdict Sahu was to pay for the bullock and was fined also for ill-treating the animal.

The people present there were happy to hear this and, as Alagu sang in praise of the fairness of the Panchayat, voiced it loudly. The fairness of the decision was attributed to God’s own presence in the Panch. The private interests were sidelined and justice was upheld. The voice of the Panch thus became the voice of God. The two friends also forgot their old quarrels and got reunited.

Though this is the plot of the story, the contemporary beliefs of the society and those of the writer himself can be read between the lines. Apart from the setting and the narration giving a good picture of the life style those days, the characterization and the plotting also reflect the spirit of the times. For example, as the world has become more corrupt, such a story will not be taken seriously these days.

In characterization, the writer says that Juman became a scholar because his father was a stern and strict teacher who resorted to corporal punishments (which is a crime today). This reflects the old idea ‘spare the rod and spoil the child’. Probably, it is the callous treatment by his father that made Juman insensitive to his own aunt later in life.

Alagu’s father was more of an affectionate character who made his son seek the blessing of his guru by attending to his needs. This atmosphere in his childhood, even though didn’t make his a scholar, still made him a person well liked by the villagers.

However, the conventional minded villagers attributed the fairness of the judgment to the presence of God in the panch. Everyone in the village, in that case, had moved away from God when they had resorted to unfair decisions and to take sides out of prejudice. Looking at it from an objective point of view, both Alagu and Juman rose above their petty, personal interests and adopted an adult-like attitude when they were given responsibilities. Thus the characters show their traditional nature, child-like behaviour and adult-like attitude in various situations. This is what makes the story sound realistic just like all the other works of this writer.

SO FAR, SO MANY

This is a blog which I started for my ICSE students from India. But, when I moved to other schools, I found that there are a lot more takers for IGCSE notes and I found it interesting to interpret some of the lessons. I am leaving all my stuff on these pages with the hope that someone somewhere might find it useful.

ON THE SANDS OF TIME

ON THE SANDS OF TIME